Why is Planning so Important for Your Small Business? 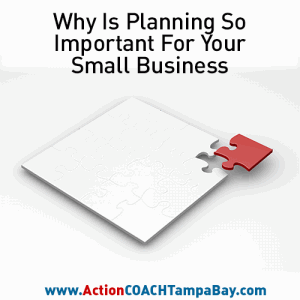 Spontaneity can be a good thing, but not when talking about your small business. For that, planning is a better idea. Without planning your business will go off the rails faster than you can say train wreck. Planning involves setting goals, breaking them down to milestones and writing it all down.

Here’s an interesting set of numbers. The MBA class of 1979 was polled as they graduated about whether they had written down goals. 3% had written goals, 13% had thought of some goals and 84% had nothing. Ten years later that 13% were making twice as much as the 84% who didn’t. That small 3% did even better. They were making ten times as much as the entire 97% put together. Just by writing down their goals.

Goals aren’t just pie in the sky ideas. Goals can be grandiose, but real, well thought out goals are challenging, but attainable. They are like a blue print or road map for your business. Start out by writing the big general idea. Then break it down into an actionable plan. Write down steps or what will be needed to attain the big goal. Write them with enough detail that each step is actually something that another person could follow if you gave it to them. Make milestones to be reached: quarterly, monthly, weekly and daily. It takes that really big goal and cuts it into bite sized pieces. Much less overwhelming that way.

When you write them down, include the reward for attaining each step, and the overall reward. Then share it with others. People who are successful in using written goals share them with others because that means someone is holding your feet to the fire and keeping you accountable.

Without planning and writing down your goals, your success as a small business aren’t guaranteed. With them…well ten times better is much better than status quo.